Article in the Moorabbin Kingston newspaper about the ride and Abbie Fennessy Trust.
To see the full version please visit:
http://leader.newspaperdirect.com/epaper/viewer.aspx 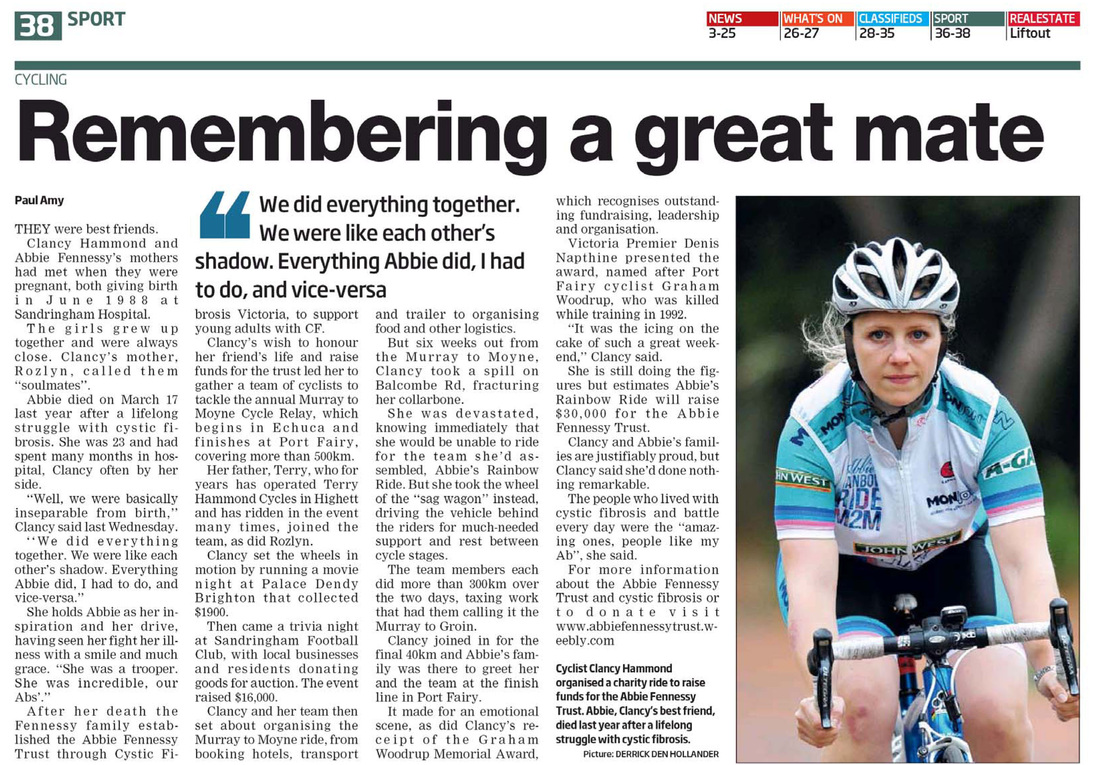 WOW!! What a mammoth effort it was for the amazing team of riders who rode the 520kms to raise much needed funds and awareness for the Abbie Fennessy Trust and Cystic Fibrosis. Starting out at the Murray River in Echuca our fit cyclists rode in pelotons, taking turns to do legs of about 27-45km stints at a time then swapping over for much needed rests in the support van that followed them closely the whole way. Riding the distance over 2 days is a gruelling task by any means but keeping this cause close to their hearts helped the riders push on. Team morale was kept high throughout the distance with jokes, music, competitive digs, and lots of sugar, slices and water to get them over the line. They looked amazing in their custom made jerseys and knicks all in Abbie's favourite colours, and were easy to spot coming through the finish line in Port Fairy after riding over the Moyne River, with broad smiles through the pain of aching muscles from the huge ride.

A presentation after the ride saw Clancy Hammond (Abbie's life long best friend) receive the honour of a 'Woody's Murray to Moyne Memorial Medal', for her hard work and dedication to organising, raising money and awareness of Abbie's story through Abbie's Rainbow Ride for the Abbie Fennessy Trust and Cystic Fibrosis. Victorian Premier Denis Napthine presented a surprised and thankful Clancy with the award as she tearfully spoke about what Abbie's Rainbow Ride was about and why it means so much to her. 'Woody' or Graham Woodrup was one of the founders of the Murray to Moyne cycle relay and was tragically killed while cycling. The Murray to Moyne website states that "Each year 'The Graham Woodrup Memorial Award' is recognized by a special award being presented to someone who has displayed 'exceptional effort and inspiration' to others in the course of his/her team's involvement with the Murray to Moyne, In memory of 'Woody'."

Clancy was a co-recipient of the award this year and is extremely touched for the recognition for all her hard work getting the ride off the ground. Of course none of it could have happened without the team of Abbie's Rainbow Riders who were all deserving of many accolades. We also saw some of Abbie's old doctors from Monash Medical Centre who completed the ride for the 'Monash Pulmonary Peddlers' which was fantastic. After the ride the team, consisting of riders, drivers, supporters and Abbie's family had a relaxing afternoon and celebratory lunch at Abbie's uncle & auntie's house in Port Fairy. Wood fire pizzas, mini hamburgers, drinks, rainbow cake and much more were shared over stories of the ride. Thank you to all involved for making this possible; all the sponsors, and our riders who - without your grit, sweat and determination none of this would have been possible. You're all amazing!! WELL DONE!!

Check out the pics in the Gallery.

Abbie's Rainbow Ride and Clancy's award were featured in the local newspaper 'The Standard' in Warrnambool / Port Fairy, have a read:
http://www.standard.net.au/story/1414727/cyclists-up-to-the-charity-challenge-of-woodys-murray-to-moyne/?cs=72

What a hugely successful night we had!! Held at the Sandringham Football Club we had a beautifully decorated room filled with lots of family & friends there to support Abbie's Rainbow Ride for the Abbie Fennessy Trust. Silent and live auctions broke up the very entertaining rounds of trivia MC'd by Mark Loft (one of our riders). Poor Clancy Hammond broke her collar bone on a ride the day before the trivia night but still managed to do a wonderful job of presenting the night and her inspiration for the ride - her friendship of 23 years with her best friend Abbie. Raffle tickets were popped from purchased CF balloons for 2 lucky people to win donated Giant cruiser bikes! Stunning CF roses were sold throughout the night, some for the fantastic draw prize of a holiday at Nelson Bay NSW! A signed Orica Green Edge jersey was the auction item most of the riders were after. Lots of other amazing auction items that were donated were snapped up by the end of the night. With lots of food and drink being shared I'm sure everyone had a wonderful night. We have been blown away by the level of support from our family, friends, sponsors and supporters alike. Their generosity is so greatly appreciated and we can't thank everyone enough. Thank you for supporting such a great cause, honouring Abbie's life, her struggle with CF and the lives of those like her who are affected by this awful illness. This is for them. Check out the pics in the gallery.

Can't wait for the ride!!

We had the privilege of attending the CFV Committee Luncheon at the Caulfield Racecourse on their Summer Race Day, one of their biggest fundraising events held each year. One of CFV's main sponsors 'Powersource' was kind enough to nominate Abbie, after hearing her story, for the memorial race that is held each year. The first race of the day was named the 'Abbie Fennessy Memorial Plate'. A beautiful and strong horse named 'Resistant' won the race, which we though that was pretty suitable as Abbie always showed immense resistance everyday in her fight for life. We had the honour of presenting the winning team with the plate for the race. We then sat down to a delicious lunch and enjoyed bidding in the auctions and hearing from the MC Brian Dawe and guests of the day Harry and Austy Coffee. Harry is a jockey who has CF, and competed in a few of the races on the day - it was fantastic to watch him in action, and to hear from his dad and trainer Austy. Overall it was a great, but emotional day for us - all for a fantasic cause to raise money and awareness for Cystic Fibrosis. For more info please see:

A HUGE thank you to David Douglas from Powersource for the table and naming the race in Abbie's honour, check the website out:

A team of approx 30 of Abbie's family and close friends joined other CF supporters and walked around Princes Park in Carlton VIC to raise awareness and funds for Cystic Fibrosis. CFV organised the event and it was a really great day with lots of money raised for CF. Participants could enter in teams and prizes were given for the best t-shirt design. Teams could raise their own money from donations through the Everyday Hero website, below. There was raffles, sausage sizzles, ice-cream, face painting, massages, coffee, music and lots of people to meet, all with one great cause - to support those suffering with CF. It's held each year so if you're interested head to this address for more info: